I still call BS on Ready Player One movie adaptation. Spoilers, duh. A crazy unwinable race is taking place but you can win, if you go backwards from the starting line. Nobody discovered the secret for years! Bullsh**

Let me tell you a story about a game called TrackMania. It is a stunt based racing game. Community support has given TrackMania nearly unlimited custom tracks to play. When played at a LAN party, you can have a over 200 players on a server. All playing the same track. This is possible because each player is racing alone for the best lap time. You can see other players, but they are ghost cars that you can clip through. The match continues for a preset time, during which you can make as many attempts as you want at having the best lap time. 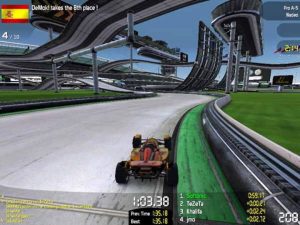 Because of the nature of user made tracks. Things get crazy really fast. Having the best lap time isn’t always about maintaining control of your car, making a perfect turn, or accelerating to “just” the right speed to jump from one halfpipe to the next.

So let me set this up for you. I drove 5+ hours to attend a LAN party in Menominee. It was setup in the college’s auditorium and was run like a big convention. Even inviting speakers and hosting workshops. Most folks were there for the various tournaments. The LAN party went on for THREE days. Guests were invited to stay the duration, but not necessarily play for 72 hours straight. Only best players like me stayed up all night. In the wee hours of the night, between the tournaments I signed up for, there were hours of downtime to fill. You could take a break, or join any one of the spontaneous LAN matches. TrackMania became very popular because of the number of players it supported and how crazy fun it can be. 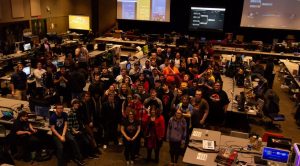 Most tracks are a grind of memorization. Within the time limit, you can reset your car back to the start line and try again as many times as you want. Fall off the track and plummet to the ground? Reset. Flip upside down because you didn’t hit the loop de loop just right? Reset. As long as you have the lowest lap time by the end you can still win. However, the craziest tracks are so hard you can’t actually make it to the finish line more than once. The track is so crazy, with so many stunts and pitfalls, just surviving to the finish line gets you on the leaderboard.

One track in particular stands out in my memory. The time limit was set for 30 minutes. From the start line, you can see most of the track laid out before you. Dozens of half pipes and loops, jet propulsion lanes, all floating hundreds of feet in the air. My first attempt resulted in me plummeting to my demise within the first 10 seconds. With the advantage that I could see where other drivers were taking the jumps, little by little I would survive longer and longer down the track. After just 5 mins of game time, I noticed names appearing on the leaderboard. People were reaching the finish line. This was typical for our group of players. What wasn’t typical was the lap times. 5.6 seconds, 4.1 seconds, 3.5 seconds! I reset and stayed at the start line to watch them. They were driving backwards! The finish line was literally behind the starting line. You couldn’t see it at all from your perspective in the car, but if you blindly drove backwards sure enough. 3 second lap time.

My point is. This is the exact plot of the movie Ready Player One. Only in the movie, the entire overpopulated world played the race over and over. Failing for years to find the secret. Seriously? It took my group of maybe 50 people less than 10 minutes.

The plot from the book was so much better. The main character was a student with no money. The only reason he even owned a VR rig was a grant from a charity so he could attend high school safely. In VR his friends all had enough credits to go off world on the weekends. Leaving him alone on high school world. This is how he discovered and beat the first challenge. The creator wanted a student to win. That’s why the first key was placed on a school planet.